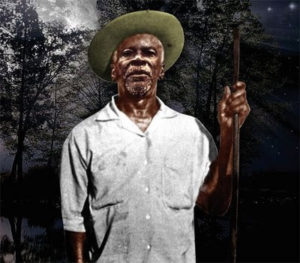 The Santo Daime religion was founded in 1930 by Mestre Irineu. His first experiences with the tea brought him into contact with the Virgin Mary, in theappearance of the “Rainha da Floresta” (Queen of the Forest). After this introduction, he was commissioned to establish a spiritual doctrine: Santo Daime. This religion recalls ancient traditions from Brazil, Africa and Europe.

Daime of Santo Daime is the sacred sacrament of the church. It is an entheogenic tea from the Amazon rainforest. Entheogen means “coming from the god in ourselves.” Enthogens are psychoactive substances that make you come into contact with that God in yourself. These substances have been used for centuries, mostly in a spiritual or religious context.

Within the tradition of Santo Daime, these tea, the setting in which the beverage is drunk and the religion all share the same name: ‘Santo Daime’.

“Dai me” means “give me” in Portuguese. “Dai-me Força, Dai-me Luz, Dai-me Amor” (give me strength, give me light, give me love) are the phrases that often come back in the The hymns. 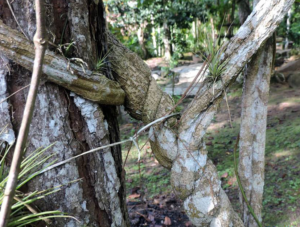 The tea that is drunk during the work of the Santo Daime is psychoactive and made of two plants, a female plant and a male lian. This lian with the Latin name ‘Banisteriopsis caapi’ is also called ‘liaan of souls’. The second important ingredient is chacruna (Psychotria viridis). This latter plant contains the active substance DMT (Dimethyltryptamine). This is a body-like substance that is created in the pineal gland.

The liver and stomach usually cause the DMT to be degraded by MAO enzymes (monoamino oxidase enzymes). As a result, the DMT can not reach the brain / pineal gland and you will not notice any effect. However, the Banisteriopsis caapi ensures that DMT is not broken down. This plant contains MAO inhibitors (harmine, harmaline, and tetrahydroharmine). These inhibit the action of the MAO enzymes, which inhibits the destruction of DMT, the DMT can reach the brain and opens to the spiritual dimension. The effect can last for 4 to 6 hours.

When you are born and when you die, the pineal gland in your brain makes large amounts of DMT. Especially during a dying process, it often happens that this gives the dying great insights about the life he or she has led. In a ceremony you can get similar insights. This can help you transform your life.

Santo Daime is a recognized religion and it is lawfully accepted in the Netherlands to drink Daime during church services.